From time immemorial, if there is something that interests mankind (or at the least, gets him curious) the most is the concept of immortality. Name a civilization, there will be a group who were interested in bestowing immortality. Alchemy, which is considered to be an early day chemistry, is often associated with the keywords - immortality, Elixir, mystic. Look at the tag cloud for alchemy:

Alchemy is often referred to as protoscience and is believed to have given birth to a lot of current day chemical processes.

True to my Pottermore senses:

Alchemy is an optional subject taught at Hogwarts School of Witchcraft and Wizardry to sixth and seventh years. It concerns the ancient science of Alchemy, the study of the four basic elements, as well as the study of the transmutation of substances

True to its definition, the movie depicts it as a bright red color stone. But why was Voldemort after this stone?

The philosopher’s stone, or stone of the philosophers is a legendary alchemical substance capable of turning base metals such as mercury into gold or silver. It is also called the elixir of life, useful for rejuvenation and for achieving immortality; for many centuries, it was the most sought-after goal in alchemy. The philosopher’s stone was the central symbol of the mystical terminology of alchemy, symbolizing perfection at its finest, enlightenment, and heavenly bliss.

It is said that Sir Issac Newton was a scholar in the field of Alchemy and recently, an interdisciplinary project named “The Chymistry of Isaac Newton” came into limelight for its efforts to research on Newton’s chymistry career.

Suklachev Ion project is said to have found a way to decelerate the aging process.

Now that we know there has always been some interest in this subject, Mercury and Gold immediately turn our attention to India, its mythology, and Siddha. Siddhas were often described as people with mystic powers. The western world saw them as ancient alchemists. There was different school of Siddhas in India, but they all had a common goal - Immortal life. The process they followed to attain that goal was mainly fueled by the use of concoction made out of mercury.

Disclaimer: This post is not advocating oral administration of mercury or any mercury based products. This is purely for educational purposes.

Mercury in its actual form was not used, instead, it was purified through various amalgamation processes. The method of processing mercury for therapeutic purposes is known as rasa suthi in Siddha system.

Mercury is regarded as ’killed’ when it becomes a hard metal or a red-blood stone. The mercury that is ‘killed’ – mrta or stalled (rendered non-volatile – baddha and reduced to ashes- bhasma) with the help of powerful herbs, is transmuted into gold.

This red-blood stone is what is analogous to Philosopher’s stone. The problem that this field suffered was that the entire process was so complicated and was the disciples who took this up were not able to achieve the level of perfection this field demanded.

Bhogar, the famous alchemist, who was also a Siddhar, is said to have sculpted the famous Palani Murugan Statue using the nava pashana. Mercury is another prime ingredient in that process and it is said that milk and panjamirtham that passes through the idol, can pick up the benefits of this nava pashana and pick them up in small quantities. 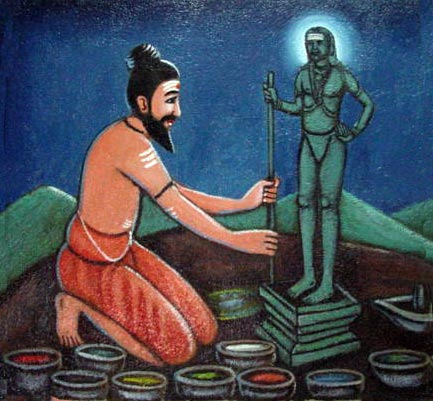 Mercury Balls or Lingas made of Mercury are a fairly common thing to find on the internet these days. While the energizing properties of Mercury are undeniable, taking dips or longer bath in places like Theerthakund must be done with high caution. Before you even dream of doing it, read, re-read, even if you want to dispute, the energy shifts it can cause on humans.